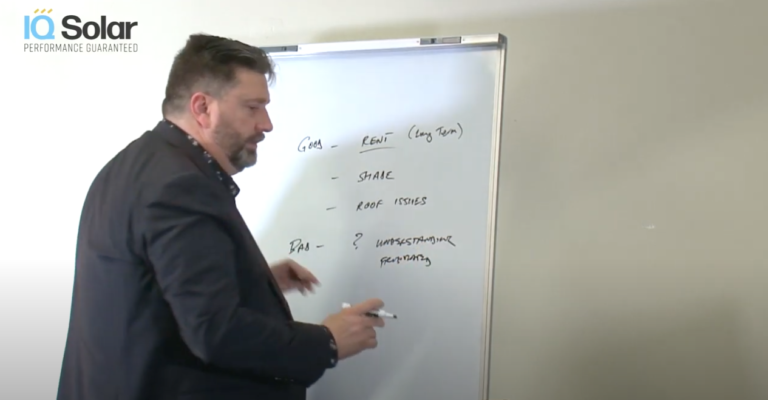 I want to cover why people don’t buy solar. So there’s a couple of good reasons actually. So one of them is… Good reasons might be that they rent. It’s not their property, and this is really a part of whether or not they have a long-term view of the world. If you’re renting, quite often you’re on a year-by-year or every-couple-of-years type lease, so you may not see it as being a suitable investment. Solar actually has a payback period for homes of typically between three and five years. So an example would be you invest $10,000 in the system, consider it’s a 10-kilowatt system, and that might save you $3,000 a year.

So if you look at the accumulated savings, in just over three years, it has paid for itself. That’s what we call payback period. But if you’re renting, it’s really hard to justify that unless you come to some arrangement with your landlord, which is still a bit complex. At the moment, there’s no real structure for that. Another good reason is shade. Shade kills solar. There’s no two ways about it. I live in a house, for example, which has massive gum trees about 10 meters away from the house, so it’s shaded. Pretty much summer and winter, solar would be no good.

It could be some roof issues, and that might stop you going ahead with solar. So bad reasons for not choosing solar are really about question marks, so they’re about not understanding solar or being frustrated. So I know people that have looked at solar. They’ve spoken to three or four different installers. They’ve got amazingly different opinions from all of those people. Some of them swear black and blue, that this is the system size you should put on. Next person says, “No, mate. They’re crazy.” This person recommends this equipment, this person recommends this equipment, so sometimes it’s just easier to forget it. So I’d call that a reason why people don’t do solar quite often, but it’s a terrible reason.

So our goal is to really help you understand what it is that you’re buying, what you can expect from it, so that if you decide to go ahead with solar, you’re doing it with a level of certainty over costs and outcomes, which is really what solar is all about. So it’s how much you’re going to save off your bill quarter by quarter. So if you’ve been stuck before and decided not to do solar because it’s just been too confusing, you’ve got bad advice…let’s help you.

If you think you’ve got shade issues, maybe you have, maybe you haven’t. We can look at the timeline of your roof throughout many, many years and look at different seasons and how much it impacts. If that shading is only transient, we can do an analysis on that, and there are solutions we can look at including using microinverters instead of a string inverter on that system so that the impact of shading is minimized. If you’ve got roof issues, maybe it’s worth talking about. If you’re renting or you own the home but you’re going to move, then sometimes those are just decision killers and we understand that. So there is a mix of good and bad reasons. We’d love to talk to you. And if we can help you make the right decision, that’d be great.