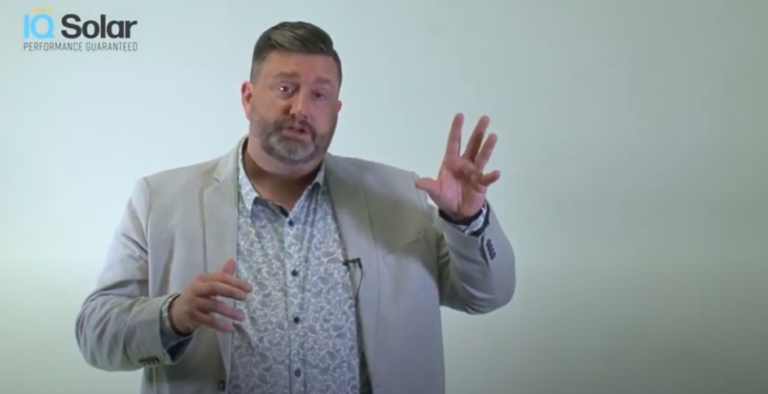 I want to talk about warranties that come with a solar system. So this gets a little bit bitsy because there’s a variety of components, you’ve got the panels, you’ve got the inverter, and you’ve got what we call the balance of system, which is your framing and your cables and so forth. So I’ll start with the panels. There’s actually two types of warranty that come with a panel. There’s what’s called a performance warranty, which actually just describes the natural degradation of silicon. So if you were to say that when a system goes on, it’s at 100% of what it should be doing, at the 25-year mark, a lot of panels are warranted that they will be performing at at least 80%. Some brands of panels actually have a higher rating. LG, for example, have I think it’s around a 90% performance warranty at the 25-year mark, which is pretty extraordinary. But all panels drop off in performance by a percent or slightly under 1% per year. So that’s what is the performance warranty.

You’ve then got a product warranty, which is often 10 or 12 years. There’s been a kind of trend in the industry that companies are offering higher or more years of product warranty with their panels. So LG, as an example again, has got a 25-year product warranty. Which is extraordinary. SunPower, which is an American brand, has a 25-year product warranty and Q-Cells, which is a Korean-owned company, also is introducing some models which have a 25-year product warranty. There’s others, there’s a brand called REC, and I think theirs is 20 years. But I could be wrong. It’s around there. There’s another cheaper brand that’s just moved from 10 to 15 years to try and compete with this. But basically, the panels have a very long life span. There’s no moving parts. If things go wrong with them, they’re going to probably fail within the first five years or so. It’ll be quite noticeable.

With the inverters. The inverter is really the part of a solar system that does most of the work. So just to recap a little bit. Panels produce DC electricity, a direct current, that is cabled up and it travels to an inverter which converts that from a direct current to AC, which is what we use inside our houses. So basically, the inverters are very busy and it’s the part that is doing all the work, and it’s also the part that’s most likely to fail. So a good quality inverter will have a five or 10 year warranty. Sometimes that’s broken down as… So with Fronius, for example, which is a high quality product made in Austria, they have a five plus five. So the first five years is parts and labor, and the second five years is just parts. So it’s still 10 years, but the second five years is not as useful as the first.

Other brands do a similar thing. Sometimes you’ll get a brand entering the market like Huawei, which is obviously from a massive company. They are offering a 10-year warranty on their inverters straight out of the box, so you get a very high level of assurance, because it’s from a major company, and it’s a long time. The life span of an inverter could be anywhere from 10 to 15 years. So at some point, that is the part that’s going to fail. But you might get 15 years out of a high quality inverter. The balance of system frames and things like that, they tend to have a 10-year warranty, but nothing really goes wrong with frames. You also get a workmanship warranty, which could be five years or 10 years, depending on the company that’s offering it. But those are the things that you’ll often see on a proposal from a company.

The part that we want to add and we are including in our proposals is what’s called a performance guarantee. So with all these individual product warranties, if something were to go wrong, you still have an issue. There’s a lot of finger pointing about what it is that’s going wrong. Sometimes it’s clear because it’s the inverter. But you still don’t know who’s going to look after you. So we are going to wrap our systems up with a performance guarantee. We will report to you on what the system is achieving versus expected, so you will get regular reports on what it should have done, and what it is doing. And if it’s not performing, we will rectify it. So that you will see in our proposals to you.

So that’s an overview of warranties. Like anything with solar, it’s not terribly familiar, so if you have questions or you want to see data sheets, things like that, or want to talk about equipment, then that’s what we’re here for, and we would love to help you get informed so you can make the right decision.