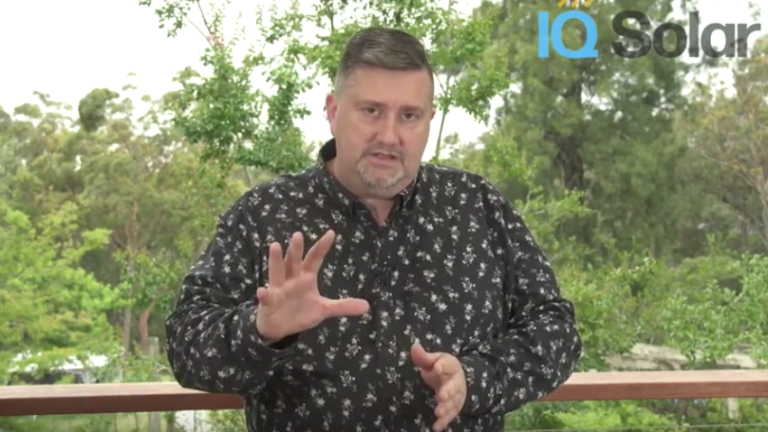 Hey, my name is Stuart from IQ Solar, and I want to cover five mistakes that people make when they are looking at buying solar systems.

So the first mistake that people make is not understanding fully what solar is going to do for them. There’s a lot of people who have misconceptions or don’t really understand what’s happening electrically. And without getting too bogged down in detail, basically, there’s two things that happen when solar energy is produced. It’s either consumed, in which case, it’s saving you whatever your rate of power was per kilowatt-hour or it’s exported, in which case, you’ve got a look at the value of the feed-in tariff. Those are the two things, and that’s the only two things that can happen to solar power. But people don’t understand that, and they make judgements about size and all sorts of things without understanding why those are important.

The second mistake that people with solar power is that they compare apples and oranges. So there are so many factors with solar power. It really is difficult to compare one system against another. We’ve got different equipment types for panels, different equipment types for inverters, different installation companies, different sizes, different ways that the system is designed. So it’s very rare that you’ll be able to compare two identical systems side-by-side. So people will look at the price and say, “Why is this one different?” But they’re actually two different things.

So the third mistake that people make when buying solar is buying on price, not on quality or on outcomes. In the absence of understanding what solar is doing for you and understanding the difference between these brands and these brands and this installation company or this one, if that’s too difficult, people just go to the lowest common denominator, which is price. And there’s lots of cheap systems available in Sydney, so it’s possible to buy a solar system for less than $3000 right now. Do you want that system? Maybe not. So what do you get for $4000? What do you get for $5000? What do you get for $6000? My point is that maybe that product is right for you, but it’s quite likely that it isn’t. So buy with an understanding, not just on the lowest dollars. Otherwise, what will happen is almost inevitably within a few years you’ll be dissatisfied or it won’t be working. Who knows?

The next mistake is that people don’t get and pay attention to the monitoring on the system. So when I started in solar 10 years ago, monitoring wasn’t very common. If you wanted to see what your solar system was doing, you really had to walk up to the inverter and scroll through the menus, and you could get a very basic amount of information, how much power it had produced today or ever, and how much energy it was producing right now. But now almost every brand of inverter will give you the opportunity to sync with an app, and you can look at that on a PC or the app, and you can see what your system is doing. If you are not following that, then it’s quite possible that if your system wasn’t performing, you would have no idea. So at least use the basic monitoring that comes with every system. And if you’re really, really concerned about what’s going to happen or you’re just curious, there’s other third-party monitoring packages such as Solar Analytics, which are absolutely amazing. They can tell you what’s happening inside your house as well as the production of solar power. So there are really excellent solutions out there for you to take control of your energy usage as well as see what your energy production is like. The last error is about batteries. So everyone is curious about batteries, but my question is, a battery is worthwhile right now, and most times the answer is no. I can show you the economics of a battery in less than 60 seconds. And for some people, they are excellent, and for some people, they are not. So solar has a very fast payback period, typically three to four years. Occasionally if it’s a more expensive system, it’s five years or thereabouts, but that’s still like getting a 20% return on investment on your funds into solar. Batteries are much longer as a Return on Investment. There may be some other reasons for choosing them. It could be that you experience blackouts or brownouts or that the cost of a blackout to you within your house is very high, and that’s why you would focus on batteries. But as an economic proposition, they’re not great, and I’m very happy to run through those numbers with you ’cause I’d like you to focus on what is important, which is the solar, and forget about what’s not important, at least in the meantime. We think batteries will come down, and we think that when they hit the right price, then we will be all over it, and we’ll be so happy to show you what they can do for you. But for most people, that’s not quite now. Alright, that’s a summary of five things. They are not understanding solar, comparing apples and oranges, choosing price over quality, not getting monitoring or not following your monitoring, and lastly being hung up on batteries.

So those are five mistakes. It’s not all the mistakes that people make, but those are five of the big ones. So if you are interested in solar, I would love to have a conversation with you. We can demonstrate what solar will achieve for you, for your home. Thank you.