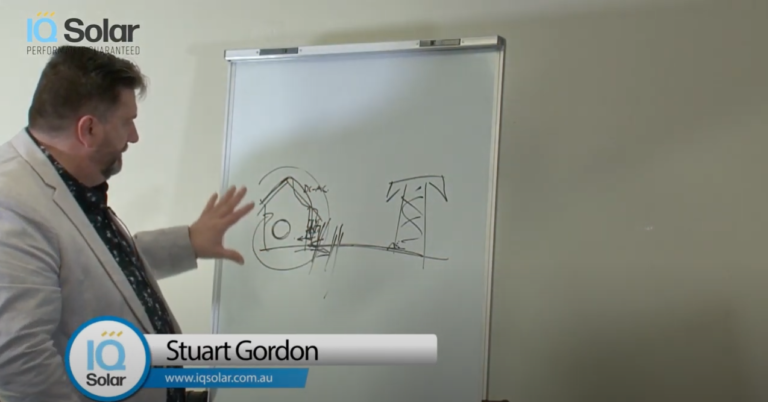 So I want to talk about what happens to solar during a blackout. There’s a very short answer, and that is that it stops. It does not continue to power your home. The reason for that is one of safety. So basically what’s happening with solar is, we have your house, we have the grid, these are meant to be transmission lines, and you have power coming in through your meter box. We have solar on your roof.

Now, under normal circumstances what’s happening is you’re pulling power in from the grid that has been added to with the solar, and if you’ve got a load in your house, then first the solar power is used and then the grid power. If this is broken, so there’s a blackout, for example, the inverter which sits on the side of your house or inside the garage, which converts from DC to AC current, detects that there is no power coming from the grid, and for safety reasons shuts itself down. The reason for that is that it also has to prevent power going back out to the grid. So if people are working on these lines, for example, and there’s no power on the grid, if there were power still being produced, it means that there is the risk of that power going back out to the grid, so all inverters have this cut-off, it’s called anti-islanding, which basically means it will turn itself off. There is one exception, and that is, if you have a battery system, so let’s say you’ve got a Tesla power wall here that can… That’s wired up in such a manner that it can trick the inverter into believing that there is power, but stop power going out.

So it means that you end up with the battery being able to supply your home and the solar also being able to charge the battery. So you have this system that continues working within your home, but is absolutely still separated from the grid. So that’s what happens with the battery or some battery configurations, but if you’ve just got solar, it will not help you in the case of a blackout.