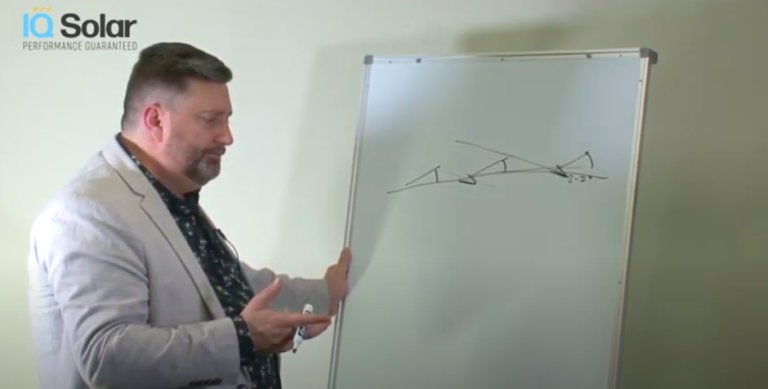 So the question is, to tilt or not to tilt? And what I’m referring to is putting panels on a framing system that is either parallel to the roof, so flush to the roof, or on an angle, so that you get the optimum orientation or angle to the sun. So why would you use tilts? And the short answer is that you use tilts because you can extract a higher amount of kilowatt hours from a system by using tilts. The sort of level of increase could be anywhere from 5% to 10%, depending on what your actual flush level was versus the tilts. But in Sydney, for example, an optimal angle or orientation is north and at that your optimal tilt is 25 or 28 degrees thereabouts. But you can’t always achieve that. Does that matter? Not as much as you think. So people use tilts at the start of solar. So when I say the start of solar, the start of popular solar in Australia which was say 2008, 2010, because panels were so damn expensive. They were approximately six to 10 times the cost that they are now. So it was worthwhile doing absolutely everything you could to milk every last bit of power out of those panels. Which is why if you drive around, you might see houses with a tiled roof sort of facing East West, but then people have put tilts on those and it looks incredibly awkward, that probably made sense at the time.

The best practice now, is simply to put them flat on roof. So just as an idea of what we’re talking about is that if you’ve got a… I’ll tell where it matters the most. Where it matters the most is if you’ve got either an industrial roof, which can be incredibly flat, anywhere from two to seven degrees or you’ve got an architecturally designed home that has a metal roof just in a nice soft fall. And sometimes you get a five or seven degree pitch on those as well. If you wanted to put on a system that got the maximum amount of power out of every panel, you would use tilts like this, so there’s a framing system. The reason to not use a tilt is kind of indicated here, you have to have a lot of spacing between them, otherwise when sun hits it actually shades the previous one, if these are bunched too close, they actually end up killing the production of the solar system.

So, best practice is, nowadays, to go flat on roof, unless you’ve got an incredibly small angle. For industrial, there are framing systems that let us get say, a 10 or 15 degree angle, which means we can actually put panels still quite close to each other, without the self-shading thing happening. Always happy to talk about the merits of any individual situation, but typically, we would not use tilts.