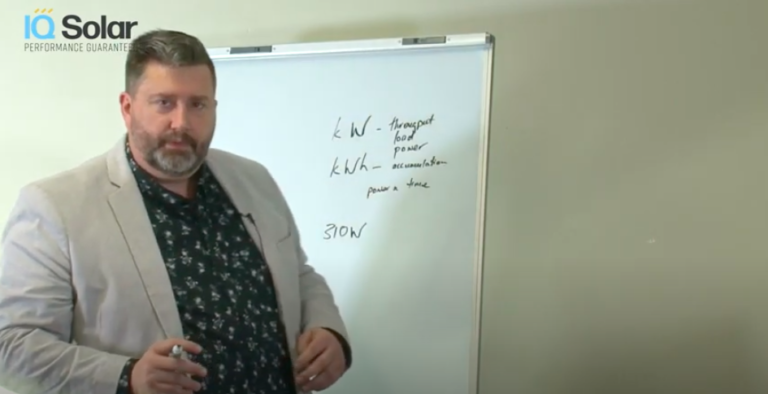 I want to cover a definition of a couple of terms that everybody uses when they are talking about solar. And people get these wrong, even people in the industry use them incorrectly, so I want to explain to you the terms of kilowatt and kilowatt hour. So in essence, best example is this, so if you look at one of your… A household appliance like a hair dryer, for example, quite often that’s got a rating on the side, it might say 2000 or 2400. That’s how many watts that device consumes. Vacuum cleaners might have it as well, so a more powerful vacuum cleaner might be 2000 watts, and a weaker vacuum cleaner might be 1100 watts. 2000 watts is two kilowatts. And that is a measure of how much power that device is consuming. It’s the throughput of power through that device. Another analogy would be a kettle. So I think the electric kettle is normally about 2000 watts. So if you were boiling a jug of water, then basically that device is consuming 2000 watts, or two kilowatts.

So the relationship between kilowatts and kilowatt hours is simply that of time. So imagine you had a hair dryer that was rated at 2000 watts and you used that for one hour, you have now used two kilowatt hours. If you used it for half an hour, you’ve used one kilowatt hour. So basically these terms are, small k, large W, and kilowatt hours. You could call it throughput or load or power. Kilowatt hour is an accumulation, or a measurement of power times time. So with the solar system, you’ll see this, the panels themselves are rated at a certain wattage. So each individual panel, you might get a panel which is 310 watts, for example, which means that it’s capable of producing 310 watts. If you had 20 of those… I’ll make my maths easier, it’s because I’m thinking on the fly. Let’s say it was 300 watts, and you had 20 of these, that is then a 6 kilowatt system. So that means that it’s capable of producing at its maximum potential six kilowatts. Now, as an aside, it very rarely does that, but that’s for different reasons, but basically that’s the throughput of the system.

There is a relationship between the size of a system measured in kilowatts and how much energy… So this is power, kilowatts is energy. How many kilowatt hours that system will produce in a day? So let’s say you had a system that was 6 kilowatts, and at midday, which is the sort of best time for solar, it was producing at full capacity, for the sake of the example. During that one-hour period, it may produce 6 kilowatt hours. But because solar actually produces power in a bell-shaped curve throughout the day, this top point could be 6 kilowatts, but in fact, it’s likely to be less, in the morning when it starts up, it’s just a few hundred watts. So the relationship between the system size, and the total energy that that system will produce during the day is normally, or on average, it’s a relationship of 4 to 1. So a 6 kilowatt system will produce around 24 kilowatt hours per day.

Now, people mix these up all the time. People who should know better. So people in the industry, they’ll just sort of colloquially refer to the energy that someone consumes and their power, for example, they’ll say, “Oh, you’ve used 24 kilowatts.” Now, that’s quite incorrect. So if you hear that, it just means that they’re not using that term correctly, what you’ve actually used is 24 kilowatt hours or produced 24 kilowatt hours. Kilowatts is throughput, kilowatt hours is an accumulation. It’s like mixing up speed and distance. So kilowatts is like speed. An instantaneous measurement of how much power is either being consumed or generated. And kilowatt hours is the accumulation of that over a period of time. So the reason I mention this is that it comes up all the time in solar, we’re either talking kilowatts or we’re talking kilowatt hours. And if you understand what each one of those is, then it will actually help you understand your solar system better.

It also comes up with batteries. So if you’re looking at a battery system, there’s typically two measures that people will talk about, the most important one with batteries is how much energy it will store, and that is measured in kilowatt hours. So for example, a Tesla Powerwall 2 will store 13.5 kilowatt hours. It has as a maximum throughput at any one time, willing to be corrected, but I think it’s five kilowatts. So what that means is that, if it’s powering a house, the maximum power at any one time that it can put through is 5 kilowatts, but its total capacity is 13.5 kilowatts. So imagine you were powering your house off a Tesla Powerwall 2, if you were running a variety of things including lights, TV, etcetera, you could add up the kilowatt rating of all those… Or wattage rating of all those devices, and you would therefore be able to work out how long that 13.5 kilowatt hours would last.

So without diving into too much maths, basically, there is a big difference between these two, one is the load, which is the instantaneous measure, and the other is accumulated. So if we’re talking about them, I certainly hope that we will be using them correctly and not slipping up. But it’ll help you in reading anything about solar, those are the two terms you need to know.