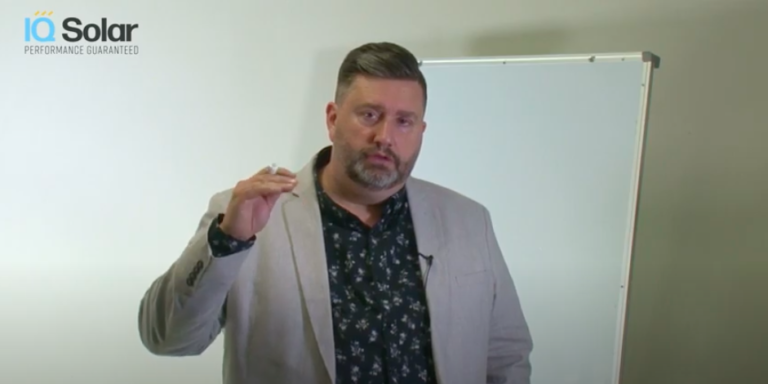 I want to talk about the concept of clipping or oversizing of inverters. So what this is about is you typically put more panels on a system than the actual writing of the inverter or its intended output.

So you often see this with these budget buster systems, the 6.6-kilowatt systems, which have 6.6 kilowatts of panels, but they marry that up with a 5-kilowatt inverter. So is that a good idea? Well, yes is the answer. The reason is that a 6.6-kilowatt system very rarely produces 6.6 kilowatts. In winter, you might only get 3 or 4. In summer, you probably get some days where it’s over 5, but the heat actually decreases the amount that the solar puts out. You get the best days which are bright but cool. So it’s very rare that the clipping has a major impact on your system. It might actually only happen a couple of dozen days per year.

So the main reason that it’s done or two main reasons, one is that the way that it drives the inverter, which is very near its capacity, is better for the inverter. It actually makes it more efficient. The second is that it makes the system more economical. If you were to increase the inverter size just because the panels sometimes produce that much, you would be investing in a larger inverter but not really seeing the benefit of it. So the overall sort of annual decrease in the system’s performance from clipping might only be 1% or thereabouts. It’s very, very small. So it is absolutely standard practice to oversize the inverter capacity with a slightly larger array. So if you see that, don’t worry. Basically what’s happening is this. Throughout the day, a solar system in ideal conditions will produce power with a bell-shaped curve.

Now, let’s say this is a 6.6-kilowatt system. This 6.6 is very rarely going to be reached. In fact, in winter, you’ll get… It’ll be, as I said before, 3 or 4 kilowatts, and in most of summer, it might be 4-5.5 kilowatts, that sort of thing. So having an inverter that actually chops off this top bit, it’s really only chopping off that very infrequently, but that’s what’s happening. So it’s called clipping or oversizing, and it’s quite acceptable. So if you see it and you might be a bit put off by the fact that there’s this mismatch in sizes, don’t be. It’s perfectly normal.