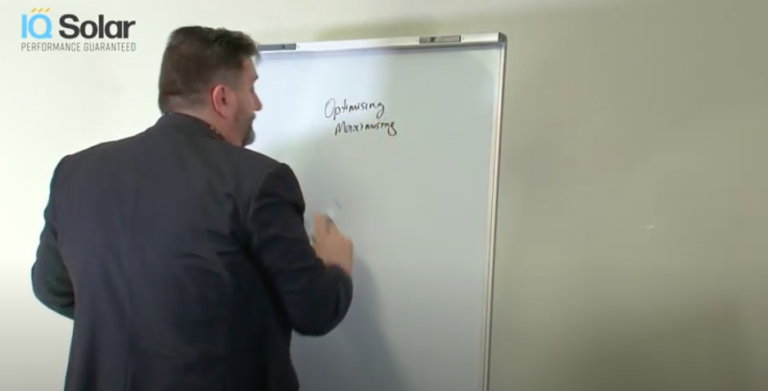 I want to cover a couple of terms that I use quite often called optimizing or maximizing. And these are about the system size that we put on your roof. So, just as a very quick recap, your system size that you put on your roof, it’s going to be limited by one of three things. Basically, you have your roof size, you have your load, and you have what you are allowed by your grid, your DNSP. And this sets an upper limit that you might be allowed to connect to a grid. So you might have a very large roof, but a low consumption, and what that’s going to look like is this. Throughout a day, you might just use a little bit of power. And these two concepts, optimizing means you put on a system size that is designed to not really export much power. So let’s say you had a very small amount of consumption. You might look at solar and say, “Okay, we’ll just put on this system size, or a system size that gives us this output,” and maybe that’s 3 kilowatts, for example, because we don’t want to export any power, but you still end up paying for all of this power that you’re using in the evening and the mornings. Maximizing says, “Okay, if you’ve got the available roof space, let’s use it. So let’s put on a bigger system. Let’s put on a system that does this.”

Now, you might be wasting a lot of power, or exporting, not necessarily wasting, but this is going back out to the grid, and you’ll get a small feed-in tariff for this. So, the idea is that you’re actually using your available roof space, you’re not actually consuming all of this power yourself, but you are producing it and it’s going back out to the grid. This is really what I’m going to recommend for most people right now. The reason is that solar is incredibly inexpensive compared to what it’s been in the past. You could put on a 6-kilowatt or 10-kilowatt system for quite often less than $10,000, and that’s going to produce, in many cases, more energy than you are using during the daytime, but it goes back out as a feed-in tariff. It might seem wasteful, because you only get a small amount through a feed-in tariff, let’s say, 10 to 12 cents per kilowatt hour in New South Wales, other states have different schemes. But this actually sets you up for more longevity of your system.

So, down the track, batteries will become useful, which means this power here, instead of being exported back out to the grid, goes into a battery, and it’s used at night time. So, by putting on a larger system, by maximizing the system size rather than just optimizing it for your daytime consumption, you are setting yourself up for a system that has more longevity for you and is ready for batteries.