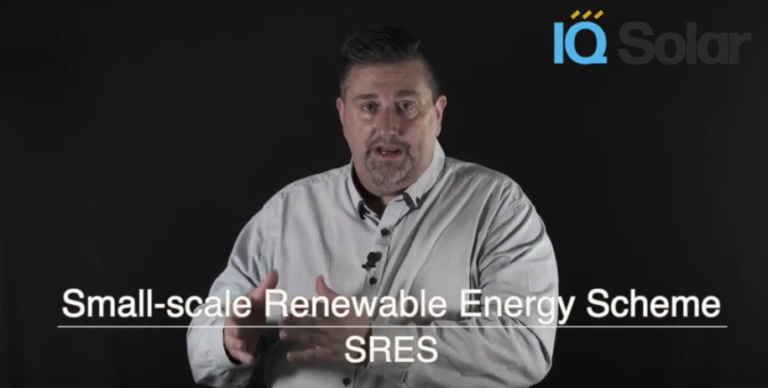 Hi, my name’s Stuart from IQ Solar, and I want to talk to you about the solar rebate. Now, technically, it’s not called a rebate, but it kind of walks like a duck and quacks like a duck, so we’re gonna call it a duck. The name of the scheme is called the small scale renewable energy scheme. It is a federal scheme, and I’m gonna tell you 10 quick facts about it that’ll help you understand it. It is a federal scheme that has been in place since 2010, and it goes through all the way to 2030. Every year, at the end of every calendar year, there’s a small change to the formula, which means that the rebate gets decreased. So between 2020 and 2021, the value of the rebate went down by about 9%, which on a 6-kilowatt system was worth less than $300. So it’s worth knowing, but it’s not worth panicking about.

So first point, it’s a federal scheme, it’s been in existence for a long time, and it will keep going for another 10 years.

The second point is that everybody is eligible for the scheme, in fact, it’s got nothing to do with your house, your income, your location, any of those things, anybody is eligible for the scheme. There are quite a few advertisements on Facebook, and if you’ve been looking for solar, there’s no doubt you’re bombarded by ads in Facebook now in your feed. Quite a few of them will talk about the rebate, the fact that the rebate is decreasing, or some might even say ending which it’s not, or asking you, “Are you eligible?” It’s one of the most annoying questions because it’s entirely misleading, everybody in Australia is eligible for the rebate, it has nothing to do with you.

The third point is, it’s based upon the system size. So a larger system, more panels will qualify for more rebate, it is that simple. There is a method of qualifying, you have to use products that are from a prescribed list that includes the panels and the inverters and it has to be installed by a Clean Energy certified electrician, but basically everybody that will be offering you solar will be choosing from those products and will be a Clean Energy certified electrician. So you don’t need to worry about whether or not you’re gonna miss out, everybody gets that rebate.

The fifth point that I wanna make about the rebate is that everybody will quote you a price for solar after the rebate, if somebody says that a particular system is $5000, you can rest assured that that is after the rebate. It is just absolutely standard within solar to talk about prices after the rebate. So it’s not necessary to jump in and say, “Ah, but what about the rebate?” It’s not gonna make it cheaper, they’ve already taken that into account. So for example, on a 6-kilowatt system, that system may have started out at $8000, there’s roughly $3000 of rebate and now it’s $5000. That $5000 is the price that will be quoted to you, that is the part that matters. You may be showing the full calculation, but the part that matters is what you will pay out of pocket.

The next point is about how simple the rebate is for you. So obviously it’s shown to you in your quote and you’ll see the value of the rebate. You have to do very little in order to claim it. In fact, on the day of installation, the installer will probably hand you a phone or a tablet of some description, and you sign to say that it’s been installed and that’s it, that’s your work done. There’s quite a bit of paperwork at the back end of this. In order for us to claim the rebate, we need photographic evidence, we need every serial number of every panel, the serial number of the inverter, photographs of the site and so forth. So we submit those in order to get the rebate, but for you, it’s a signature on a device typically, and that’s it, it’s done. It’s done on the day, and then it’s just taken into account in the price that you pay.

The next point is that you can claim the rebate on second system, another system in another house, or increasing the size of your system. You’re eligible to use the rebate as long as you are putting on more solar, it’s that simple. It’s not a matter of having used it at a particular property and then you’re done. If you’re putting on more solar or another system, then you can get that rebate again.

The eighth point about the rebate is that the value of it may change. So in fact, technically what the rebate is, is a number of certificates that are generated, they’re called small-scale technology certificates, STCs. And these are generated at the instant that the solar is put on your roof and is capable of producing power, that then generates a certain number of certificates which you assign to us, and the fixed part of that, which is the government formula, is how many certificates are generated. Now, the value of those certificates is moderately stable, but it does vary day by day and week by week, it hovers around $34 or $35 per certificate at the moment, but when we trade them, we’ll pay a dollar or two in transaction costs, so that’s why you might see one company offering you a certain price for the rebate and another company offering you a tiny bit different for the rebate. There is a theoretical maximum of $40 on the rebate, but to get that, it’s some convoluted method, most people will just process them through a trading house, they will assign the rebates that have been assigned to us, and we just get a clearing house to pay us for them. So that’s why you might see some different values assigned to the rebates if you’re looking at different quotes.

The ninth point about rebates is that the scheme is limited to systems of up to 100-kilowatts. Now that’s much bigger than anyone is gonna put on their home. Most people are putting on 6 to 15-kilowatts on their home, but above 100-kilowatts, there’s an entirely different scheme for larger scale solar. So often with business solar and small commercial, you’ll see people putting on up to 100, which lets them access that rebate, which has been worth, say, $50,000 or thereabouts instantly, and take that off the cost of the system. If you exceed 100 kilowatts, then you don’t get that at all, you have to claim it every quarter or every year, and it becomes quite convoluted, so most people… If you’re looking at something close to 100 will actually cap it and put a ceiling of 100 on themselves. So it’s not that relevant for you if you’re a homeowner, but there is an upper limit to these STCs.

The last point is the fact that these are a federal scheme and they’ve been in existence for a while, there are other states that do different things. Victoria for example, has an additional state-based scheme where there’s another set of state rebates that lower the cost even more. South Australia is quite progressive, they’ve got some other incentives going, so I’m based here in Sydney, New South Wales. It’s quite simple for us, we have this rebate and that’s it, but if you’re in Victoria, if you’re in South Australia, there are other things going on, other states probably have different things as well, but I’m not aware of them, so… That’s it. That’s a quick primer, 10 points on the solar rebate. If you need to know anything else, reach out, happy to help.