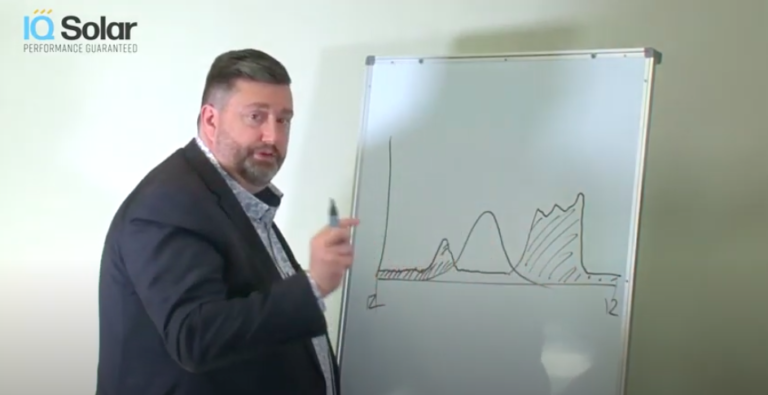 I want to talk about how much of your bill you could expect to eliminate. So, this is going to dive into a little bit of a technical area, so bear with me. So, there’s a range of factors of course, it depends on how big your bill is, and what size system you put on. But, I want to give you an indication of the overall way that solar works, so that you can have an understanding of why those system sizes have an impact. So, if we look at your household consumption over a 24-hour period from midnight to midnight for example, on any given day, you might have some things running in your house anyway; computers, some lights, stuff like that.

Let’s say you wake up, cook breakfast, do some stuff then everyone goes to work and this goes back down again, you’re coming home from work, or the kids come home from school, this goes up, you do stuff in the evening and it all drops down again, and goes back to this level. So, this is a typical pattern of consumption for people that are not at home during the day. What solar is going to do for you is typically produce power in this bell-shaped curve. So there’s a range of things that are showing up in this. This is power that you are buying from the grid during the night and during the evening, and you’ll pay for this power at whatever rate your energy contractor is at.

So, what we’ve got is basically three things that are happening: You’ve got power that you’re just gonna continue buying from the grid, you’ve got power that you are consuming yourself, which is now free power for you, and you’ve got power which is going back out to the grid, and you’ll get paid a little bit for. So, this is what’s called a feed-in tariff, and a feed-in tariff is not the sole driver of putting on a solar system, but it can help. And the reason it can help is that, let’s say you were paying $600 per quarter for your energy, this amount here, might only knock out a couple of hundred bucks for you per quarter, but then, the exported power might knock out another couple of hundred bucks for you.

So, you might bring your bill down from $600, you’ve got what’s called self-consumption of a couple of hundred bucks, and then you’ve got exported or feed-in tariff of a couple of hundred bucks, which means your bill comes down to $200 hypothetically, right? You might get more as a feed-in tariff or less. If you take a situation where you’ve got a higher level of consumption during the day, let’s say you work from home, and you put on a solar system and it does this, as you can see from this, you’ve got a higher level of self-consumption, you’ve also got a higher usage, but, in this case, it might actually eliminate more of your bill.

If this is your situation and you put on a bigger system, then, you’ve got more self-consumption and more feed-in tariff. It is possible to get your bill down toward zero hypothetically or even in credit. If you end up in credit on a bill, depending on who your retailer is, they’ll have policies around sending you back that money. If it’s one of the companies that does electricity and gas, they’ll credit it against your gas account. So if it’s AGL for example, and you’ve got a credit on your electricity bill, you can roll that over to your gas or, just leave it there, because this situation might only happen in summer for example, and in winter with lower solar production, maybe you’ll end up using that credit.

So, just be aware that it is theoretically possible to end up with a negative bill, and there’s ways of dealing with that. So, basically, what you need to understand is that there’s three things that are going on with your energy, and they all happen seamlessly. You never have to switch anything over or do anything, you’ve always got the grid there to provide your power, except of course when there’s a power cut. But, you’ve got the grid providing you power, you’re either using that power, or you’re producing your own and using it, or you’re producing too much, using it and some is going back to the grid.

And if you understand that, I won’t go into it in full detail here, but where batteries come in, and the reason why people look at batteries, is that this amount here that is exported is then stored into a battery and then it is used later on. So, if you store this energy in a battery, it actually gets literally put into a box and then it’s used during the evening and you have more self-consumption. So, there’s an economic case for batteries, and it depends what you’re paying for power, whether or not this is truly economic with batteries. In some parts of Sydney, so for example if you’re in an Ausgrid part of the world, which is the middle of Sydney, most of the eastern suburbs and up and down the coast; that’s all Ausgrid. You may be on what’s called time of use, and with time of use, the value of power along this consumption changes.

So, you might be paying overnight what’s called an off-peak rate of only 14 or 15 cents. You’ve got a peak period in the morning, and then it’s… And peak is high, it’s like 50 cents per kilowatt hour, then you go to shoulder, and then from 2 o’clock to 8 o’clock it’s peak again. Now, if you’re paying 50 cents per kilowatt hour, that is one of the times when batteries might make sense. So, people look at batteries for typically two reasons: One is because they’re load shifting, which is storing that excess and using it later, or they’re worried about blackouts.

So, if you have a blackout, a battery can still continue to power your house for as long as you have energy within that system. Anyway, that’s a small digression about batteries, but if you understand what it is that we’re talking about and the inter-relationship between these two things being how you’re using power and the solar production, then, you can see how it is possible that you could take a decent buyout of your bill or even eliminate your bill. The way for us to work this out is to look at your bill and have a discussion with you about how you use power, and then we can come up with a system size that is going to achieve your objectives.